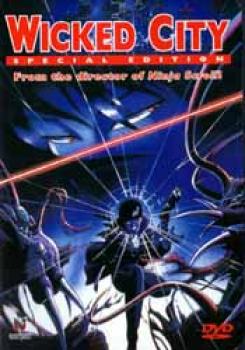 For centuries, a secret peace treaty has existed between Earth and the Black World, a parallel dimension populated by shape changers possessing awesome supernatural powers. But now, that pact is up for renewal and a militant faction from the Black World plans to do everything in their power to stop the treaty from being signed. The fate of the world now rests in the ability of special agents - one human, the other a shape-shifter from the Distaff dimension, to make sure things go according to plan. In Wicked City, director Yoshiaki Kawarjiri blends stylish eroticism, graphic horror, and pulse-pounding action in such a way that it is easy to forget that it's only a cartoon! The first tiem i saw this movie was on TV. From what I read in the short short synopsis was that it would be a hard, fast hitting, demon involving action packed movie. Of course they mentioned it had explicit sex scenes but hey... How bad could they be?

The story is really good but not every character raises the same sympathie with me. Like the little perverted old guy is funny but he only interests me in the end when he reveals who he is. The Black Guards are both great. Not a normal Hero duo like you would expect but hey this is anime and not a Hollywood feature film. The action is great all the lines and the gun the main character uses is kick ass. Only the sexscenes with the demons is a bit overdone. It's not as disgusting like in Urotsukidoji but for someone who will see hentai for the first time it'll be shocking I think.

I watched it only once and I don't know if this is the kind of anime you'll watch over and over again to get a new definition of life. It's fun to watch it only once. I read somewhere this movie has a huge following but I don't see why....

Overall looked at it may be a great addition to have in your collection but if you're looking for an anime with occult action in it there are better titles.