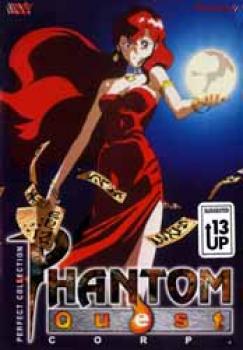 Party-girl Ayaka Kisagi turned her late-night lifestyle into a business that gives new meaning to the term "graveyard shift!" While it may seem easier for Ayaka to round up troublesome spirits than to put a corporate spin on her own free-wheeling habits, she calls upon a powerful but quirky cadre of cabalists to solve each case with flair and style. Too bad style doesn't pay the bills! No matter the terrors the dark can bring, Ayaka will be sure they get a kiss good-night from Phantom Quest Corp. ... if she can wake up in time! For ages 13 years old and up.

Gotta love those cheap DVD re-releases of old 90's OAV series. Phantom Quest Corps, also known as Yuugen Kaisha has been around for a while, with previous VHS releases that spread the series over two, or even four tapes. Obviously, one neat, slim DVD is a much more attractive buy than hunting down four chunky VHS tapes that only contain one dubbed episode each (Pioneer's French label, Kaze animation, originally released Yuugen Kaisha spread over a whopping four dubbed tapes, and got away with it). Whether you buy this disc to eliminate some old tapes from your shelves, or to discover this series from scratch, you won't be disappointed. Cheap as it may be, this DVD is nicely made, and the four OAV episodes it contains are good, harmless fun.

The titular Phantom Quest Corps is a sort of low-tech Tokyo equivalent of the Ghostbusters. Helmed by Ayaka Kisaragi, they can be hired to exterminate all sorts of ghouls and ghosts. Unfortunately, the company has serious trouble staying out of the red. This is largely to blame on Ayaka's tendency to blow insane amounts of money on booze and/or shopping sprees, to alleviate a sort of premature midlife crisis she seems to be going through.

That's just one of the running gags that provides most of the series' chuckles. It may be a mere four episodes long, but the series re-uses a lot of the same gags and plot devices every episode. This makes the series rather predictable in spots. After the first episode culminates in a spectacular duel, subsequent episodes never feel quite as fresh and exciting. But the slightly repetitive elements do lend the series a kind of familiarity and staying power not usually present in such a short series. You get to like the distinct quirks of the characters very quickly, and seeing them in each episode is endearing. Like the Ghostbusters, Yuugen Kaisha is a light-hearted comedy with the occasional spook or vampire to hunt down. Yuugen Kaisha's sense of humour is, however, more subdued and character-driven than the spectacular whackiness of the Ghostbuster's antics. Struggles to pay the rent or the clumsy advances of loveably bumbling inspector Karino (sort of like a cross between Columbo and Fox Mulder, except he really doesn't want to believe) are where Yuugen Kaisha draws laughs from.

The series looks fairly good despite its age. Character designs are pretty stark and stylised, but things move very nicely. Things really pick up when Ayaka whips out her cool red lightsaber disguised as a lipstick and darts off to duel with a vampire on top of the Tokyo tower. Action is handled well, and looks pleasingly exciting throughout the series. There's a solid, somewhat jazzy music score to back things up and the characters are fleshed out well by their voice actors. Rika Matsumoto (Satoshi in Pokemon) and Koichi Yamadera (Spike in Cowboy Bebop) lend very fitting voices to Ayaka and Karino respectively, and play off each other very well. Even for secondary characters, a lot of recogniseable seiyuu turn in solid performances (I like Toshihiko Seki in the fourth episode especially - a nice break from the suave, controlled roles he usually does).

The DVD comes with some good-looking packaging and a handful of pleasing extras (a little bit of promo footage, which can only be accessed as a hidden easter egg is a nice plus as well). A lot more care than you would expect from a catalog title re-issue has been put into this DVD, which is very pleasing when you consider the slapdash job that could have so easily marred this release. At it's suggested retail price, this purchase can't possibly hurt. It's a decent spooky comedy with some surprisingly clever humour, delivered with good presentation all round. In this bite-sized, single-disc release, it's an excellent supernatural-comedy snack.