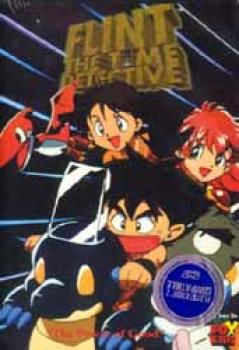 By all rights, Flint Hammerhead should be more than a little annoyed at his situation. Turned to stone in the distant past by Petra Fina along with his father Rocky, and not discovered until the 25th century, he&#39;s still guarding his charge for reasons that would baffle many. Still, it is this act that prevented Getalong (one of the timeshifters) from falling into Petra&#39;s greedy hands! There are many more of these timeshifters scattered throughout history (each with its own unique power) , and it&#39;s a race between Petra and Flint to find them! If Flint succeeds, they will be collected at the Bureau of Time and Space Investigations, and used to repair the damage to the fabric of the universe. If Petra finds them first and stamps them (which not only controls them but turns them evil) then they become a rampaging force that will destroy everything! Contains &quotTalen&quot, &quotMosbee&quot, and &quotCocoanut&quot (episodes 4-6).