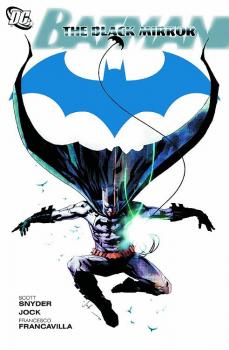 Written by SCOTT SNYDER Art by JOCK and FRANCESCO FRANCAVILLA Cover by JOCK Don't miss this epic Batman mystery from Scott Snyder, creator of AMERICAN VAMPIRE, originally published in DETECTIVE COMICS #871-877! First, in 'The Black Mirror,' a series of brutal murders pushes Batman's detective skills to the limit and forces him to confront one of Gotham City's oldest evils. Helpless and trapped in the deadly Mirror House, Batman must fight for his life against one of Gotham City's oldest and most powerful evils! Then, in a second story called 'Hungry City,' the corpse of a killer whale shows up on the floor of one of Gotham City's foremost banks. The event begins a strange and deadly mystery that will bring Batman face-to-face with the new, terrifying faces of organized crime in Gotham. 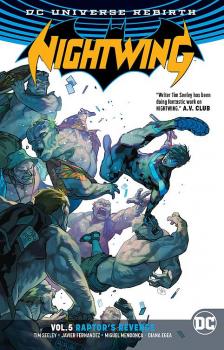 Now that's a big headline. But one the comic can back-up. Now arguably the best Batman tales are the ones were Batman and his adversaries are most human. It's dark, it's raw, it's Batman. And that's what this GN is. Though it isn't a Bruce Wayne story, it can be considered a succesor of Batman: Year One, featuring the new Batman Dick Grayson and his ally Jim Gordon.
There really isn't any need to disect the GN, this piece of art is very likely one of the best, if not the best Batman story in recent years.
It's one of the very few Novels that can be put in the line of great tales such as Year One and the Killing Joke and still look great.
In short...if we get more of this stuff in the future, all fans are going to fall in love with Batman all over again.
The only thing that might be worth knowing is that you may need to know your Batman history to follow every event.