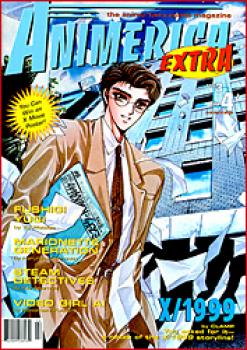 The comic magazine for anime fans, featuring fan art, columns on manga and anime, and much more! This issue features the debut of the new manga feature, Marionette Generation: A comic artist is shocked to discover that the stuffed doll in his apartment is actually alive and thinks! X/1999: Kotori, wandering in a strange world, finds herself in someone else&#39;s dream! Fushigi Yugi: Through the magic of Tai Yi-Jun, Miaka is sent in her astral body to places both in the real world and the universe of the book. Steam Detectives: Lisa Fleischer, Esq., finds that her client is being stalked by a shadowy figure who looks like the Grim Reaper! Video Girl Ai: With Yota kicked out of school, he has nothing to do but spend time with Ai. But she cannot tell him she loves him¿ or she will be erased!