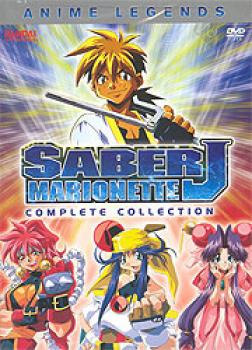 Welcome to Japoness, a society where the only females are emotionless androids known as "marionettes." Martial arts student and all around nice guy, Otaru, accidentally discovers and wakes a marionette named Lime. He soon learns that Lime is very different from other marionettes. After waking two more marionettes, Otaru finds himself facing tough challenges as they battle the evil Faust and his Saber Dolls. Can Otaru rise up to the challenge while teaching the marionettes about human emotions?655 minutes, contains all 25 episodes on 6 DVDs.

Animation:
SMJ is an old anime it started to be produced on October of 1996, so we cant expect to much out of it, the animation is missing vivid colors, leaving the entire show with a sort of dark cloud hanging over the series - typically for the early 90s, It's not so bad, seeing how it's an older series. The characters are designed decently, and each has his own features, like the Marionettes, they are all quite different from each other, but sometimes there seams to be some problems with the faces proportions, but once u get used to the show, these are only small obstacles to enjoy it¿

Music:
Its one of the good parts of the show, with Megumi Hayashibara in the main role and singing most of the song.
Each occasion features a different type of music, always feting the sad mood, whenever there's comedy or action the music accompanies it well, the op/Ed sung by Megumi Hayashibara are good, worth hearing, but the later sequels feature even better music¿

Character:
There is a lot of character development in most of the characters, and each one of the is special in its own way, like Hanagata, he is the omake in the anime, always getting his ass kicked, and everything bad happening to him, he gives some pretty good laughs.
The marionettes, they are six each has its counterpart, the Saber Marionettes and the Saber Dolls, and each has a similar personality: Lime/Tiger, they represent the women's feelings and are very emotional, Lime also represents the daughter side, they have mid strength but the highest speed.
Cherry/Luchs, they somehow represent motherhood (or something like this), they are the shy type, specially Cherry will act a lot like a mother, Luchs doesn¿t know well how to do it tough since they are only focused on the war on SMJ (ill develop more the characters in the other reviews, I cant add stuff related to the other series), they are the weakest of the marionettes, but they have mid speed, superior intelligence and tactical skill.
Bloodberry/Panter and pure pheromones (if they are supposed to have any). They represent the wife side of the women. In battle they are pure power, hot blooded and are quick to get into a fight the two were made for each other and love to fight. They are bolder when it comes to get their man. Honestly I don¿t like much the Panther in SMJ, specially her outfit and hair style, she will suffer a complete image change on SMJ-Again but this will come latter.
Otaru, the poor guy will have to deal with tree of them, but does a good job, different from everyone, he doesn't see them as machines or tools, but as his beloved girls, in the beginning ppl will think he is weird but latter everyone will envy him and will need his power, he a good martial artist, in the first ep he kicked Hanagata's sidekick's asses badly, and latter will get an interesting weapon.
Faust, for him the Marionettes are tools, nothing else more, they are severely punished upon their failures against Otaru, and latter disposed and abandoned the 19th ep is a sad one to watch for the Saber Dolls.
Doctor Hess, he is the mad professor who creates all the armament for Faust, he doesn't really work for Faust, he has second intentions, but will only be revealed on SMJ-A, so he is only a secondary character here¿

Enjoyment:
Hmm lets see I've watched it Portuguese dubbed (a good dub actually) countless time, taped it and watched the tapes a few times, the channel had problems sometimes, and I watched Spanish dubbed, other times raw (I couldn't understand JP at the time), then as soon as knew I pre ordered the SMJ ultimate collection (I managed to get one of the last 5000 copy's), so I think its enjoyable, it has fun moments, sad moments, action and suspense.
Best ep probably 19th and 24-25.

Overall:
Some might hate it some might love it, there is a small legion of fans that I know, so for me Saber Marionette is a masterpiece. How about you??