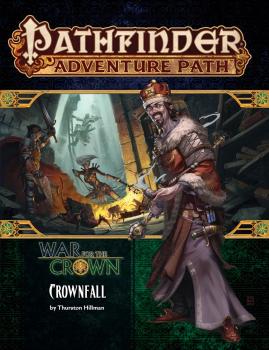 As the entire capital city gathers to celebrate, conspiracy and stagnation rot the old empire of Taldor to its core! When a high-minded cabal of Senators and nobles try to steer their nation away from disaster, Emperor Stavian III, himself, orders a bloodbath in the Senate halls, trapping neophyte spies inside layer upon layer of magical security. As tensions rise and the emperor falls, can the heroes escape the forgotten halls beneath the Senate and save the heir to Taldor from an assassin's blade? And even then, can anyone prevent a civil war that will tear the Inner Sea's oldest nation apart at its rotting seams? A Pathfinder Roleplaying Game adventure for 1st-level characters, Crownfall kicks off the War for the Crown Adventure Path as players drag a once-grand nation kicking and screaming into the modern day, becoming legendary politicians, spymasters, and nobles in their own right.