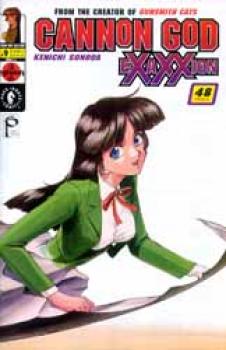 Cannon God Exaxxion is back! And now it's stacked from front to back! We've decided to start printing Kenichi Sonoda's fantastic series in double issues so you'll get more fighting action, more cute girls, and more shocking drama in every issue. It's 48 pages of bullet shells larger than tanks, tension thick as a brick, a sexy android girl who turns into a rocket-bike, and even a spicy pin-up! Hoichi was a normal Japanese teen-age boy until the day Aliens decided to take over the Earth. Now he's the only hope to save the planet. Fortunately he's got the help of his mad scientist grandpa, a team of sexy android ladies, and a giant robot armed to the teeth with the biggest cannon shells ever! But don't imagine that Kenichi Sonoda would let it be an easy fight, nor that all you'd get is cardboard characters and typical situations. Cannon God Exaxxion is full of colorful characters, harsh drama, and conflict only a teenager can create. It's a comic book that wraps super-hero tension, teen drama, giant robot action, brutal war, and silly sexiness all in one. It's Cannon God Exaxxion.