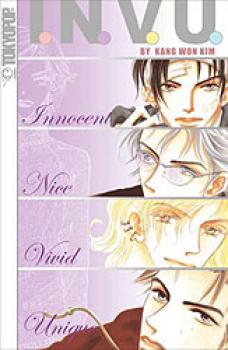 Andere Artikel in Invu manhwa US

Sey Hong's world has been topsy-turvy since she can remember. And just as she thinks there's a glimmer of hope to be normal, things get crazier. terry, the son of the family that she's staying with, is really a cross-dressing daughter named Halli... who just happens to have a crush on the same teacher that Sey has been in love with for years, the handsome Mr. Cho. That's not all. Siho Lee, boyfriend of Sey's friend Rea, has decided that he's interested in Sey. Will things heat up between the two of them? Will things heat up between Mr. Cho and Terry... er, Halli? The answers are in this dramarama filled volume of I.N.V.U.