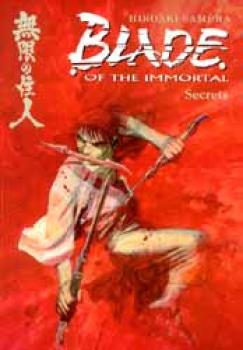 Andere Artikel in Blade of the immortal manga US

Anotsu Kagehisa, murderous leader of the rogue Ittou-ryuu, has journeyed to the mountains far from Edo to the romote Shingyoutou-ryuu dojo under invitation to bring the sword school under his wing. But instead of a warm welcome, Anotsu finds a dojo full of angry young men who don't want to take orders from an upstart, unless he can proves he's tougher than the best of them! That sits just fine with Anotsu, who has dedicated his life to putting the killing back into Japan's formalized sword schools, but Anotsu suspects that something more than proof of his worthiness lies beneath the challenge. Meanwhile, the immortal swordsman, Manji, is recovering from a battle that left him literally cut to pieces. His charge, Rin, is till nowhere to be found, bound for vengeance against Anotsu, but soon his troubles may become a bit more immediate, troubles that even an immortal may not survive! Collecting issues #58-#65 of the ongoing series.