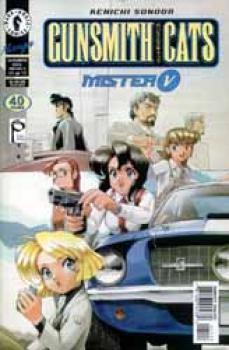 It takes more than an out-of-control 18-wheeler to stop Bean Bandit and Rally from getting their man! But now that they&#39;ve got the counterfeiter Jim Macks, what next? Macks is Bean&#39;s client, but he&#39;s Rally&#39;s bounty target! And they&#39;ve still got their friend Misty&#39;s kidnappers on their tail! It&#39;s the endless runaround of a bounty hunter&#39;s life, and as Rally&#39;s 23rd birthday approaches, Chicago&#39;s fastest draw is looking for a reward that isn&#39;t counterfeit! It&#39;s the final regular episode of Kenichi Sonoda&#39;s long-running hit, Gunsmith Cats!o This may be the end of Gunsmith Cats for now, but fan-favorite Kenichi Sonoda continues to produce GSC tales while focusing on his current ongoing Japanese hit, Exaxxion, coming soon from Dark Horse!