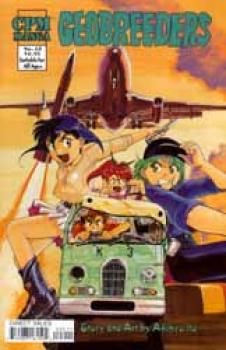 Andere Artikel in Geobreeders comic US

Terrorists in the skies over Tokyo? Highjackers joining forces with Phantom Cats? The gorgeous Geobreeders girls and the hapless Mr. Taba fly into action again as the Kagura Security team sets out to foil a hijacking for Japan National Airlines! Geobreeders is the funniest, craziest, wildest Hong-Kong action-type comic around, and things never seem to work out quite the way the girls have planned it! The skies over Tokyo are filled with pursuing planes and Eiko nearly meets her end as missiles fly and the harbor's container port collapses all around her! It's like a cross between Buffy and the X-Files, with a beautiful team of super-heroines and loads of supernatural action!